When it makes us wonder why some people are more artistic than others, scientists explain that they inherited creativity genes linked to divergent thinking. Yet how is it that some less talented artists can become more successful than others? While there is no scientific explanation for this, astrologers who are experts in reading natal charts say this has something to do with how people deal with the lunar nodes. 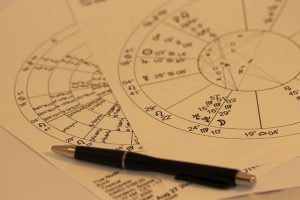 The North Node is about destiny while its opposite, the South Node is where a person’s past life can be viewed by way of astronomy. According to astrology experts, these lunar nodes change focus on zodiac signs every 18 months (1 year and 6 months) of a customary calendar period,

While most artistically inclined individuals are always up to something creative, painting on canvas, or composing music or developing a dance choreography, it’s likely that they were born under zodiac signs with highest levels of artistic creativity, namely: Aquarius, Pisces, Gemini, Leo, Scorpio and Virgo.

There are instances when it’s not the level of artistry that makes a person successful.

It’s more on how he or she uses music to express ideas at the right time and for the right generation. The most classic example is Madonna, who actually didn’t start out in showbusiness as a singer, because she knows she is not exceptionally better at crooning when compared to her contemporaries . Madonna is described by astrologers as a typical Leo, one who is never afraid to express herself in her artistic pursuits.

To astrologers, Leos are known to be dramatic people but bold and never one to look at past failures as barriers to their pursuit oif happiness. This implies that as a Leo-born artist, Madonna has the natural flair to be a ruler, a leader or a trendsetter in the realm of creativity. She did not hesitate to demonstrate this during the era of materialism and consumerism in the 1980s. Madonna personified the sentiments of many women who wanted to be: “a material girl living in a material world.”

The latest astrology report is that the lunar nodes will shift to north node scorpio and the south node to taurus in the year 2022.

Scorpio is a deep zodiac sign as many born under this sign rose to prominence and achieved great success because of their inventiveness; not only in the field of art but also in technology. The best example is Bill Gates the inventor of personal computers and founder of Microsoft. Gates proved he was wasting his time working on academic requirements when he could devote his talent to something more useful and important.